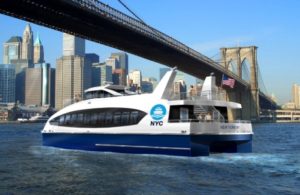 New York commuters eagerly anticipating the launch of the new NYC Ferry operated by Hornblower starting service next month, will be boarding a new transport service integrated with technology developed by Connexionz.

The contract, awarded to Connexionz in a competitive international procurement process, commenced roll out in February and will be completed next month, with on-going service and support until 2022.

Paul Lambson, Head of Customer Success at NYC Ferry says, “We chose Connexionz because of the quality of their technology, capability, and proven performance. And we were impressed with the team’s considerable integration expertise, support, and experience. Overall, Connexionz presented the most convincing and cost-effective proposal.”

Hornblower will manage a total of six routes over 60 nautical miles of waterways, connecting New Yorkers and visitors to the City’s waterfront communities – including neighborhoods, job centers, and parks. Scheduled to commence on May 1st 2017, the new NYC Ferry operated by Hornblower will offer an efficient and affordable way for people to travel between waterfront communities throughout New York City.

Among its customers, Connexionz technology also manages the city bus network and Blackcat ferries in Christchurch, New Zealand, as well as bus and rail services throughout the U.S.

Behind the scenes, Connexionz software will integrate with the vessel engines to manage and monitor engine parameters, such as fuel flow, maintenance schedules and hours of service. In addition, smart data reporting will help Hornblower with fleet maintenance, tracking and service analysis, including on-time performance.

Rhod Pickavance, CEO of Connexionz says, “Since the early 1990’s, we’ve been developing smart transport solutions and our expertise is second to none in transit technologies, communications systems (fixed and wireless), systems integration, consultancy services and transit terminal and exchange technology design. We are very excited to have been awarded the NYC Ferry contract, and to help them provide a quality customer experience, while ensuring optimal maintenance and performance their fleet.”

The solution is based on Connexionz’ TransitManager ITS suite and involves considerable integration with customer specific applications and services. To manage this project, Connexionz has expanded its software development team at its headquarters in Christchurch, New Zealand.

“Our system will initially look after Hornblower’s 20 ferries. We’ll also be installing our equipment on shuttle buses that will take commuters to and from the several ferry terminals throughout Manhattan and Queens,” says Pickavance.