Connexionz, a leading provider of smart transit innovations, has been awarded a unique contract to deliver a multi-agency regional passenger information system.

The new “iTransitNW” portal and smartphone app will connect several transport networks across three US States to enable passengers convenient access to real-time information on all rural and intercity transit and transfer connections.

Connexionz will initially manage and support seven partner agency fleets, with potential to scale and link up to 18 separate transport operators across Washington, Oregon and Idaho. 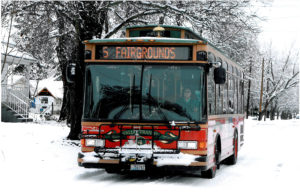 Valley Transit based in Walla Walla County, Washington is the lead agency in the contract. General Manager Dick Fondahn says, “We have an excellent interconnected public transportation network that provides a lifeline for people to important services, such as medical appointments, human services, and government offices. But, despite brochures and websites, transit providers kept receiving feedback from medical providers and social service offices that their patients and clients did not have transportation for appointments, even though a transit service was available.

“Passengers were also saying that they did not understand how to make a transfer from one transit to another and they did not feel ‘safe’ because they did not trust the transfer system would work. Also, with repeated acts of assault against transit operators in cities across the United States, concern is increasing over the security of both transit riders and employees. We needed an integrated solution that would help riders feel more aware and assured of their transit options.”

Valley Transit and its partner agencies wanted a solution that would provide a single point of entry for current riders and prospective customers to access relevant information for where they live and want to go. Accurate bus arrival prediction times would also enable riders to confidently minimize their time spent waiting at bus stops.

With several parties involved in the project and more joining over time, the iTransitNW contract is one of the most thorough proposals ever presented and won by Connexionz.

Connexionz CEO Rhod Pickavance explains, “The solution is based on the TransitManager ITS suite. However, instead of managing just one agency network, the iTransitNW system will manage multiple networks across a wide geographical area. Live data feeds from multiple regional transit operators across the three US states will be captured and shared on both a website and a smartphone app, enabling riders to see all the connecting rural and intercity public transport services in the region.”

The contract includes the provision of on-board technologies for partner agencies with optional add-on services such as multimedia, next stop audio visual alerts, vehicle diagnostics, automatic passenger counting, farebox integration, and more.  Automatic vehicle location (AVL) systems with covert alarms and audio/video capability will also be installed to allow dispatch centers to direct first-responders to the precise real-time location of the bus in the event of an emergency.

“In addition, the system will input feeds from regional agencies that have their own existing real-time service information to provide a fully connected regional transport service,” says Pickavance.

“Our scalable solution makes a regional project quite easy and allows each agency to assemble only the extra parts they need or can afford at one time.  Some agencies in the area may take advantage of features like real time engine diagnostics, onboard media systems, and people counting; while others may elect something as economical as an Android based tracking device.”

Development of the iTransitNW portal and supporting smartphone app is now underway and is expected to go live by mid-2018. Ongoing support and maintenance services including onsite support is also included, together with an extended 3-year warranty period for all software and hardware.

“Connexionz showed they really understood the purpose of this project and the goals that Valley Transit is trying to achieve in developing a regional passenger information system,” says Fondahn.

“They were the most responsive proposer in demonstrating their understanding of (a) this geographically large regional project made up of many independent transit providers, which include city and county transit agencies, non-profit human service agencies, and tribal transportation systems, and (b) the funding challenges facing Valley Transit in acting as the lead agency for a large number of small transit providers in a rural area covering parts of three states.

“It is unusual that a technology company with a rich set of features and options to suit any large urban transit system is also able to be flexible in offering a cost-efficient solution for small rural transit agencies. This is a larger geographic area, touching more states, and more independent transit providers than done heretofore.  Connexionz prior project success, flexible technology, and willingness to work with a new business model confirmed that theirs is the right solution, at the right cost, and at the right time.”

Valley Transit operates 10 bus routes in the cities of Walla Walla and College Place in Washington, United States, and is one of the four major bus services in the area connecting the region’s cities. The agency connects to several intercity transit routes operated by multiple agencies including: the Travel Washington Grape Line, Confederated Tribes of the Umatilla Indian Reservation Public Bus Service, Columbia County Public Transportation, and the Milton-Freewater City Bus.